Tarot as a Tool for Initiation into the World of Spirit

In this fast paced world where there is instant access to everything, people are still searching for something more, something that will show them the way. Though never quite sure exactly what it is, but certain it is "out there"—this deeper, more symbolic something that will guide them. There appears to be a hunger to be "initiated" into something much greater than conventional religious or church communities. In the book Lost and Found:

To experience the Tarot for personal growth and spiritual connection one must pull a card from the deck on a regular basis. Daily meditation on one card is recommended. It need not be a long meditation, but long enough for the symbolism to have some personal meaning that relates to your life circumstance.

Close your eyes. Breath deeply and exhale fully several times until you feel yourself riding the waves of your own breathing. Clear your mind of chatter. In the stillness, focus attention on your life in this moment. Perhaps you have a question to ask. A dilemma that needs your attention. When you feel centered on this issue, open your eyes. Shuffle the cards. Fan the cards in front of you. Select one card.

The Younger Unchurched and the Churches that Reach Them by Ed Stetzer, Richie Stanley, and Jason Hayes, the authors report that 73% of 20-29 year old Americans consider themselves "spiritual" because they want to know more about a higher consciousness or a supreme being. Consequently, we have become comfortable with looking to an unseen world that includes angels, oracles and spirits for this guidance. This does not surprise me because I hear the same sentiment from my clients on almost a daily basis. People want to "touch the divine" and they yearn for initiation into meaningful spiritual connection.

The word "tarot" is made up to two Egyptian words, tar meaning 'royal' and ot, meaning 'road' – the Royal Road (or Spiritual Pathway). According to Mary K. Greer, Master Tarot reader and scholar, the Tarot did not originate in ancient Egypt, an occult tradition underlies modern Tarot decks, arising from 18th century lore about the Egyptian mysteries. Mystery schools often use tarot to define the levels of their initiations and feature Egyptian god-forms and symbolism. Mystery Schools claim there is hidden meaning behind outer words and symbols that can only be experienced, not taught. The schools guide an individual through a series of rites that begin or "initiate" a transformation of consciousness. If one learns the symbolic language that is the tarot, you then begin on your path and become an initiate into the "world of Spirit." The higher use, the sacred purpose, of the symbolic system embodied in the Tarot is initiation.

Many cards within the Tarot deck depict access to divine guidance and initiation. Three of my favorites are The Fool, The Magician and The High Priestess. 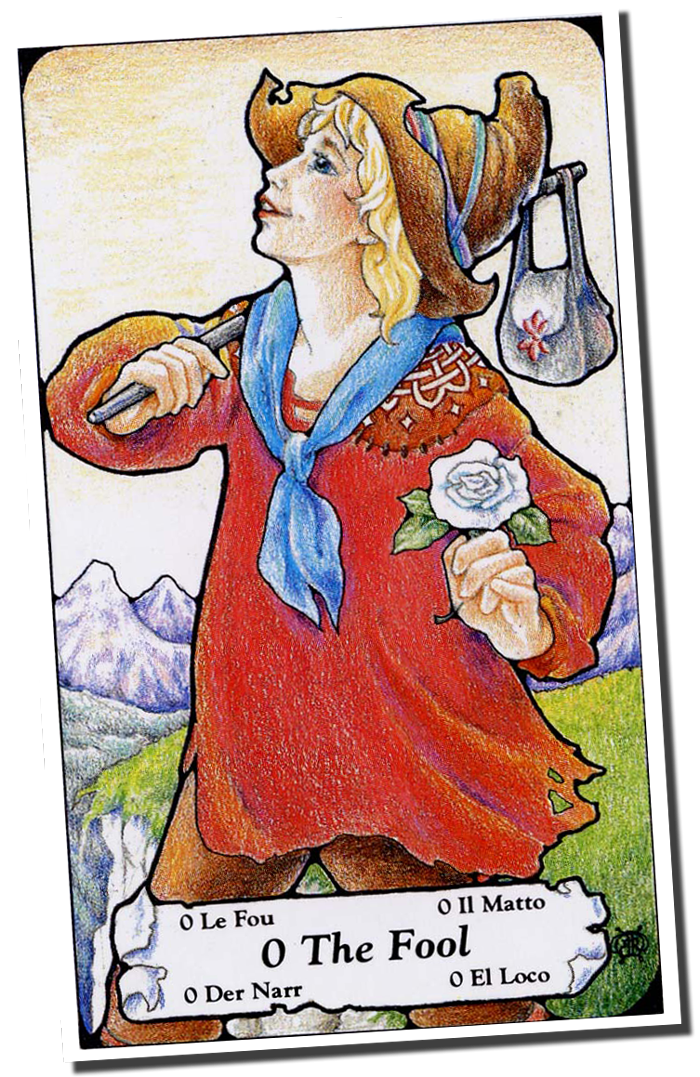 If first we look at The Fool, which is numbered 0 in the Major Arcana of the Tarot, we see a youthful figure ready to step off a cliff. In one hand, the figure holds a white rose, which symbolizes purity and innocence. On his back, s/he carries a pack filled with all the tools necessary to make his way on the journey called life. This young person has blind faith that s/he will not be harmed and has no fear about falling! You can liken this figure to the adolescent Adam (or, if you prefer, Tolkien's Frodo, or Pixar's latest heroine in the film Brave.) These iconic figures begin at nothing, "the zero," and are initiates in every sense of the word. The Fool looks up to the heavens, in a gesture that says, "speak to me" of how I am to interact as a Spirit on this earthly existence. 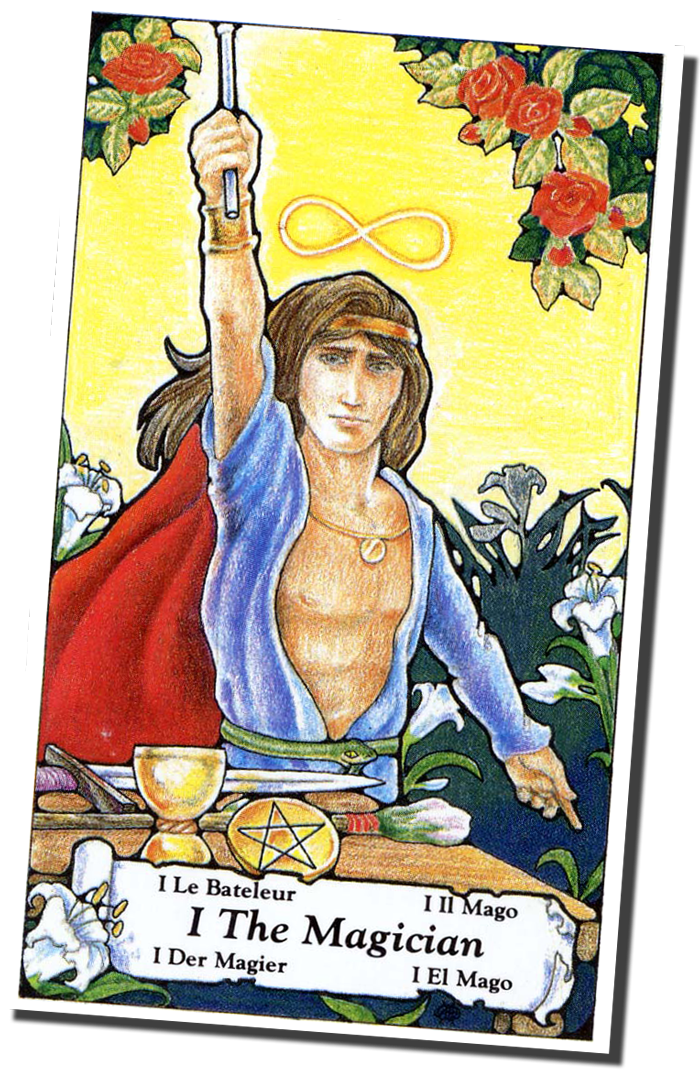 The Magician is the bridge between the world of the spirit and the world of humanity. In his right hand, he holds a staff, which he raises toward the sky, and his left hand points to the earth. He takes the power of the Universe and channels it through his own body and directs it to the physical plane. Above the Magician's head is the symbol of eternity and around his waist is a snake biting its own tail, another symbol of eternity. On his table, he has unpacked the elements of earth, air, fire and water. The number of the Magician is one, the number of beginnings; it is the number of the initiate in action! 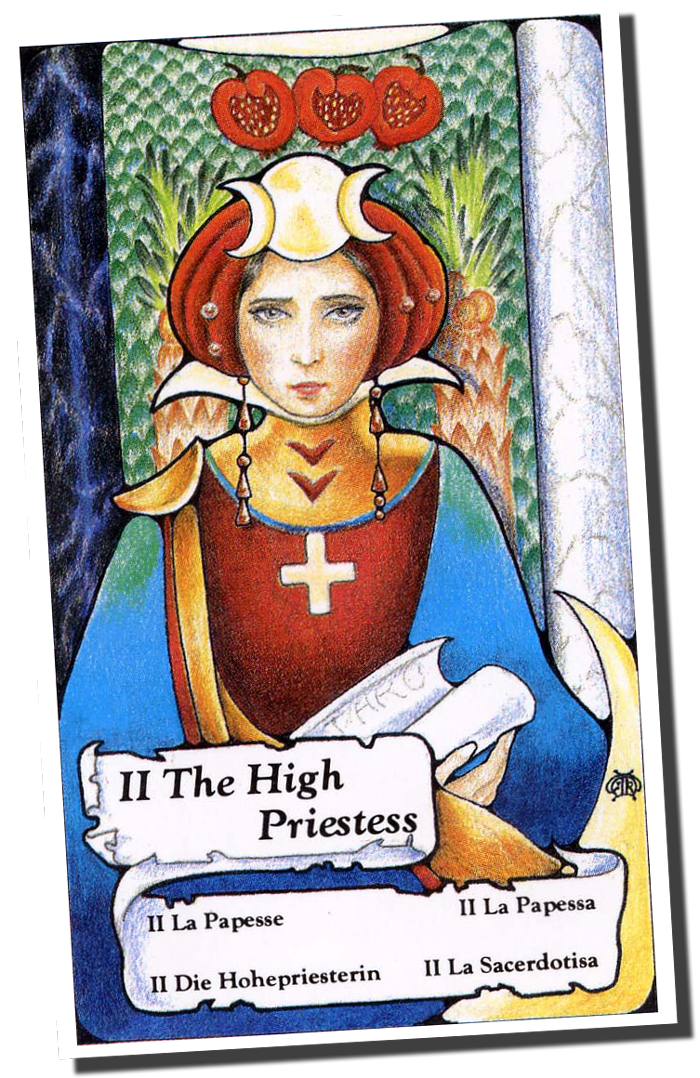 The High Priestess sits with her scroll of secrets in her lap. We know that what is written is sacred because she herself is an initiate. She sits in a temple thought to represent the mystical Temple of Solomon. In her hands, she holds a scroll of the Sefer Torah. To her left is the black pillar of Severity, which is marked with a B for Boaz, meaning strength. The white pillar is the pillar of Mercy. It is marked with a J for Jachim, meaning to make steadfast, establishes. The cross on her chest is the equal armed cross of equanimity. She keeps her own counsel and she herself is the portal or door through which Spirit speaks. The pomegranate is thought to represent abundance, and/or the fruit that was on The Tree of Knowledge of Good and Evil in the Garden of Eden.

In the above cards, I have shown a simple symbolic representation of initiation as revealed in the wisdom of the Tarot. The way of the initiate need not be long and arduous, it can be as light hearted as The Fool, as directive as The Magician, or as contemplative as The High Priestess. I wish you peace and great insights on your spiritual journey.

Karen Hollis is one of Connecticut's most highly regarded professional psychics. She is a sought-after Master Tarot reader who has over 25 years experience both reading and teaching the Tarot. A former marketing executive, Karen leads dynamic workshops throughout New England. Karen is also the Lead Psychic/Medium Investigator with Ghosts of New England Research Society a.k.a. G.O.N.E.R.S. She is writing her first book The Way of Tarot: Discover Your Life Patterns and Find Your Way to Happiness. For a reading with Karen, please call 860-665-8024 between the hours of 9:00a.m.–7:00p.m. Eastern Time.