The Way of Tarot

Learning the lesson inherent in every situation is the key to living a life of enduring happiness. Over the 25 years I have worked as a professional intuitive, conducting both Tarot readings and mediumship sessions, I have observed patterns—problems and possibilities—emerge from the life questions clients bring to the reading room. These Life Patterns play out in situations and relationships, often bringing about emotional pain and spiritual angst. In my way of Tarot, there are Eight Life Patterns that manifest, for example, on relationship struggles, in family inheritance squabbles, in the role money plays in relationship to ego and self-worth, in the quest for love and in maintaining boundaries with other people. Common among people who come for readings is a feeling of being "stuck," wanting relief from the anguish

THE WAY OF TAROT:
8 Life Patterns

resulting from a Pattern and a desire to understand why that Pattern is active in their life.

Keep in mind that a Tarot reading reveals the inner workings of the subconscious mind—the psyche (aka, soul). Tarot can provide a person with understanding of the Soul Lesson inherent in their experience of a Life Pattern. Key to facilitating this understanding is, through the reading, to cast a bright light of truth on the Vices that bind a person to a particular Life Pattern and to identify the Virtues that can empower him to break free from it. If they so choose, they can use this understanding to create a more conscious and fulfilling life.

For those not familiar, Tarot cards are an ancient tool of divination whose exact origin is quite mysterious. The first hint of Tarot cards used for divination dates to the late 1600's with increasing evidence in the mid-1700s. The purpose of the cards evolved with the changing social and religious mores of the times. One of the most significant shifts occurred as the early Church began instructing its followers on moral dilemmas and humanity's tendency to sin. At that time, Tarot cards, dubbed the "Devil's Deck", were banned by the Church – no one outside of Church authority could guide the masses on the state of the psyche (soul). Not surprisingly, Tarot cards contain symbolism related to the Seven Deadly Sins, also known as the "Capital Vices." Counterbalancing the Vices are the Seven Virtues that have the power to facilitate the soul's growth toward enlightenment/redemption.

Though Tarot cards have a historical link to the Church and its will-to-power, vices and virtues exist in all the major religions not just Judeo-Christian traditions. The many paths of Buddhism delineate a progressive Eightfold Path including virtues such as compassion, loving-kindness, forbearance, patience and wisdom. The pivotal virtues in the Hindu tradition focus on allowing followers to keep their Dharma (i.e., duty or calling) by embracing virtues such as altruism, restraint, honesty, non-violence and reverence. There are many virtues extolled in Muslim scripture including prayer, repentance, honesty, frugality, prudence, discipline, patience, hope, courage, justice, tolerance and wisdom. In Chinese philosophy, virtues relate to inner personal character and emphasize kindness, morality, wisdom, strength and integrity among others.

The most widely recognized list of Vices and Virtues evident in the symbolism of Tarot cards, are:

Not everyone faces the same Life Pattern and not every person deals with more than one Pattern in a lifetime. Until the Soul (Life) Lesson associated with a Pattern is learned, people find themselves repeating the same Pattern with different people and in different circumstances. While I believe we incarnate into earthly life with predetermined Pattern(s), it also is possible that we may experience other Patterns if that is what is in the best interest of the soul. Either way, cultivating awareness of our Vices, recognizing choices and engaging the power of the Virtues helps us learn valuable Soul or Life Lessons.

Sadly, rather than to evolve and grow in a soulful way, some people who become aware of the Vices that bind them in a Pattern choose inaction. They may be unable, or simply unwillingly to summon the energy of the Virtue(s) that can move them forward, spiritually and emotionally. Taken in this light, it is clear how exploring the deep meaning of your active Life Pattern(s) can empower you to create a more conscious and happy life, furthering the journey of the soul in this lifetime.

A Way of Tarot Life Pattern: "I'll Have the Reuben"

The "I'll have the Reuben" Pattern describes the relationship between caretaker and the person they are caring for. This Pattern can, but not always, manifest in situations such as an adult child caring for an ailing parent; a parent babying an adult child; or one spouse catering to the needs of her/his partner. The caretaker "feels good," at first, because they are constantly giving; this satisfies a need within themselves. The caretaker exhibits Pride in their ability to selflessly help another person. The caretaker is quite unaware of how they are failing to allow the other person to self-actualize and fulfill their own soul's purpose. For the person being cared for, their life lesson is tied to Sloth: There's no motivation to change in other ways if your every need is being met, as in this example with "Reuben and Diane." 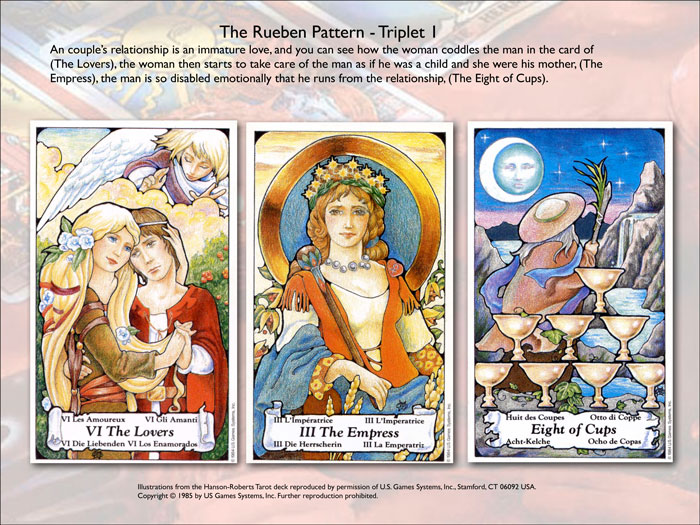 Thirty-two year old "Diane" came for readings because she was worn down from her failed attempts to get "Reuben," age thirty-four, to take responsibility for his role in their relationship. Reuben had been living off Diane's good nature and hard work for three years—in which time, Diane had thrown him out and taken him back many times. Reuben was frequently unemployed, failed to pay toward rent when he did work and didn't help with maintaining the home. The last time Diane allowed Reuben back in her life was when he became injured on a work site. Diane catered to his every need. When marriage was brought up, Reuben was evasive. Despite all of this, Diane still wanted to "have her Reuben" but she wasn't getting "the Reuben" she really deserve.

In the Tarot readings, Diane was able to see her Pattern with Reuben stifled her emotional and spiritual growth. When she had become dissatisfied enough with her life as experienced in this Pattern, she was ready for change. Diane tapped the energy of the virtue, Humility, which helps a person recognize the limits of their abilities and not, out of pride, continually reach for something greater and greater. In Diane's case, Pride kept her reaching for a relationship with Reuben that he would never give to her; she was squandering her own self-worth in the process. Temperance helped her recognize how her caretaking impeded not only her growth but Reuben's, also. 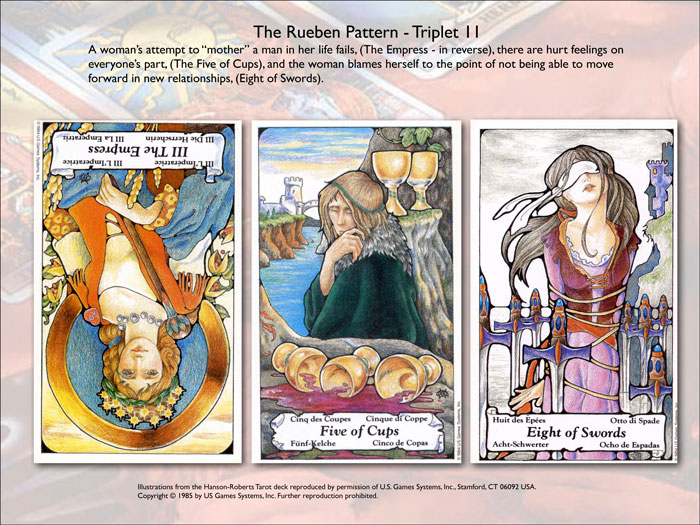 Reuben left Diane's apartment and moved in with his mother, who perpetuated his Sloth. Gluttonous for whatever was handed to him, Reuben allowed his mother to meet his every need, from cleaning-up after him, giving him money and catering to other needs while pouring on guilt for any moment that Reuben was not on her radar. His mother literally "babied Reuben to death." Some months later, Reuben committed suicide.

Diane was devastated by Reuben's choice to end his life, but given their history she understood how things got to that point for her ex-boyfriend. She promised herself to maintain healthy boundaries to prevent repeating the Pattern in future relationships. As of this writing, Diane enjoys a happier, more fulfilling partnership with the new man in her life. (noted in the Positive Outcome Triplet). 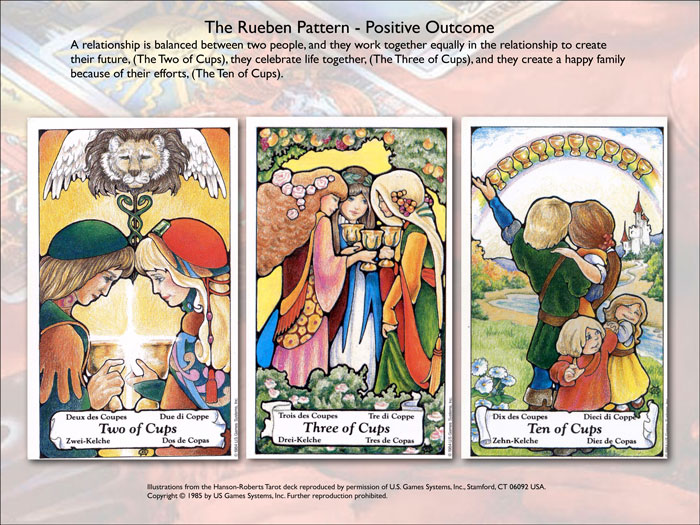 This potent example shows how not understanding why we are stuck, and not allowing ourselves to become empowered to change, can stifle—even destroy—the soul. We also see how the Vices and Virtues seek balance, as all things do in the Universe.

Karen Hollis is a clairaudient intuitive and has practiced for over 20 years. Her work has encompassed the finding of missing persons as well as the investigations of local hauntings. She is proficient in remote viewing palmistry, graphology and psychometry. She has lectured extensively and has taught both the Tarot and regular deck card reading courses. Readings may be done by phone, or in person. Phone readings for her North American clients are done in the evenings only. In-person reads take place at Karen's office at 2433 Main Street Suite #9, Rocky Hill, CT. Please call to make an appointment. If you would like to explore the Tarot Patterns that may be active in your life, get unstuck and move toward a more conscious, soulful and happy life, please connect with Karen Hollis at 860-665-8024 between 9:00 AM and 7:00 PM Eastern Time.